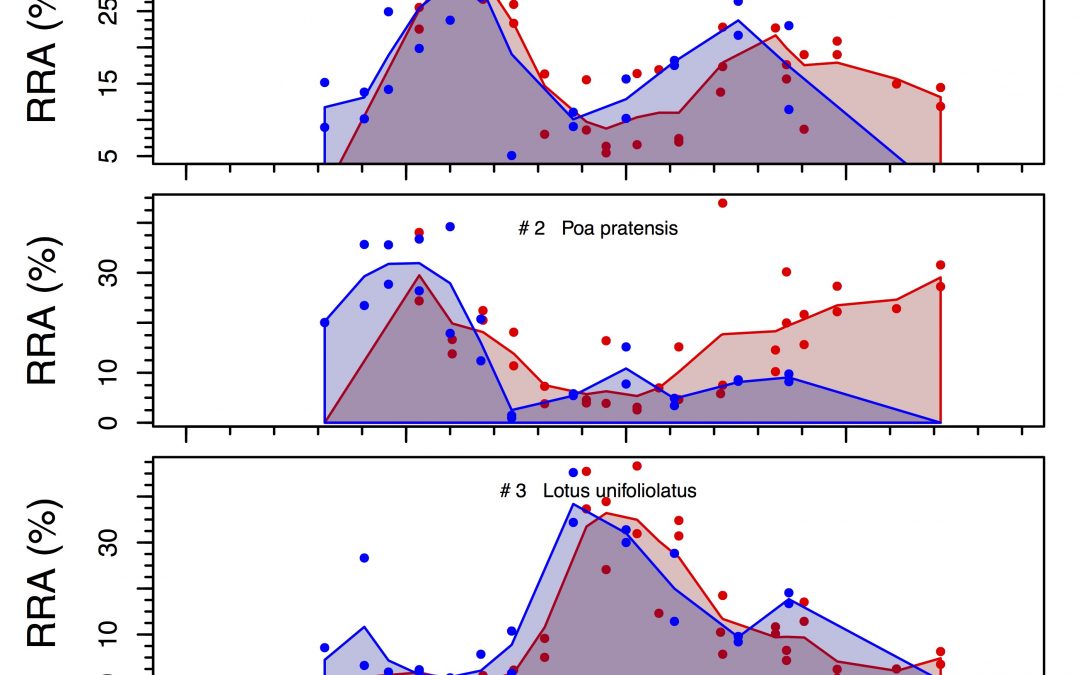 Some of our scientific ignorances are so vast we do not even realize it.

What animals eat is one of them.

At Jonah Ventures, we’ve analyzed the diets of over 25 different species and every time we do, we learn something entirely new. But, continuing to learn new things when we analyze the diets of species we’ve measured before, is the best marker of the depth of our ignorance.

Mary Miller at The Nature Conservancy’s Ordway Prairie in South Dakota has been collecting fecal samples for a few years now. The other day, we just ran ~2 more years of samples for her.

Just looking at the three taxa in the diet over the two years reveals insights that we really have not seen before. Here, samples from 2015 are in red and 2016 are in blue.

The most abundant species–a cool-season grass—shows how regularly the bison consume a given species in different years. The proportion of Trisetum (likely spicatum) in the diet follows the same pattern both years: peaking in spring (early May), declining to a minimum in late June, and then peaking again in the fall (mid September). The second most abundant taxa (Poa pratensis and similar species) shows similarities between the two years, but it was consumed a lot more in 2015 than 2016. Some years, it seems that the bison are consuming more of some species than in other years. What is driving this interannual variation just isn’t known. The third most abundant species (a Lotus—bird’s foot trefoil) demonstrates another aspect of bison diet: bison regularly switch the composition of their diet within a year. As spring turns to summer, the bison are switching from cool-season grasses for most of their protein to a legume.

In a previous paper, looking at multiple years of bison diet in Kansas, we saw the same patterns. Consistent shifts among taxa in the diet bison and interannual variation in the reliance on different taxa.

We really don’t have theory to explain the shifts that we’re seeing. Are the herbivores simply following phenological shifts in the plants? We also have yet to incorporate it into our management of herbivores. For example, no bison managers (that we know of) are currently working to promote legumes in their grasslands. In fact, most try to promote grasses.

Hopefully, as more people collect data like these we can produce more theory and then begin to incorporate into our management of wildlife.